Let me start by stating that I am a fan, in general, of Nora Roberts. I will contain my appreciation for her work to those times when she writes as J.D. Robb and Rebel Voice has already covered such tomes in the Book Review section. Come Sundown is not one of those novels.

The central two characters are the feisty Bodine Longbow and the lovable rogue, Cal Skinner. Cal is a cowboy and Bodine is the beautiful sister of his bestest friend in the whole wide world. Does this sound familiar? I hope so because it has been done to death.

Cal has left his Montana home for Hollywood where he makes good before returning to work for Bodine’s family and, ultimately, Bodine. Then he rides her, quite a lot as it happens.

We also have the presence of a serial killer and abductor of women who has taken Bodine’s aunt Alice – back before Bodine was born – as well as a number of other baby factories, as he views them. But the killer is not entirely done with Bodine’s family who have searched in vain for their missing loved one.

On top of this, we have the small-town deputy who hates Cal because of conflicts in their youth. Presumably he also wants to ride the delectable Bodine – known as Bo to her friends – but can’t because he’s an asshole and anyway, Cal’s dick is in there now so tough titty, deputy. It all gets very ugly for Cal.

Bodine’s two brothers also meet beautiful paramours at this time (suspiciously not before this time) who are conveniently good friends of Bodine (I’m not her friend so can’t call her Bo and can’t try to win her into the sack as Cal is already wailing the living life out of her and is a tremendous lover in just the way Bodine wants him to be. There are fucking orgasms all over the damn place. Who can compete with that. Any other man would be better off giving it a yank and going quietly to sleep…)

This book is fairly predictable. It reads like a cross between Mary Poppins, Hannibal, and Seven Brides for Seven Brothers. I realize that I have just made Come Sundown sound a lot more interesting than it really is.

Don’t get me wrong. Nora Roberts is an excellent writer. Her plot is good here, as are her characters. They are consistent. Consistently squelchy. I would describe this novel as slushy, mushy and gushy. It is for commercial gain and works well in that respect. Roberts is a very, very successful author. I am not. She has found a direction that works for her and has mercilessly exploited it. Fair fucks to her for showing some initiative.

However, without meaning to sound sexist, Come Sundown is certainly Chick Lit. It is a mixture of Mills and Boon and Lady Chatterley’s Lover. Normally, the bold Nora enjoys her portrayals of steamy sex and she does it very well. I expect she’s a feisty lady herself. In Come Sundown, however, she tones the explicit sex down somewhat, but still provides enough to keep her chosen demographic hot and bothered. Shagging in the barn, in the wooden shack, in the cabin. It’s coitus of the most rustic sort (I’m not knocking it).

If Nora Roberts decided to write a serious novel with long chapters and existential layers, she would produce a masterpiece, such is her talent. That she doesn’t is a loss to the literary world. Her books are light, even when they broach heavy topics. It’s a good enough approach that yields her massive financial gain. Roberts is clever but ultimately not fulfilling her full potential. I would like to see her write at least one opus to demonstrate that she is as good as any. I believe that she is. Perhaps she will accommodate me someday.

Nora Roberts is Irish-American. She is very proud of her heritage. So proud is she, that Nora should be given a position on Fáilte Ireland, the Irish tourist authority. Her inclusion of the Irish diaspora continues in Come Sundown. Bodine is feisty for a reason. It’s her crazy Irish blood. It may also be her Irish blood that makes her enjoy sex so much, although living in Ireland I’m not sure the women born here are as horny as those in the US of Irish extraction, at least that’s the impression I get from Nora Roberts. I may have to move to Montana. I hope there aren’t too many serial killers though, as I can’t be doing with serial killers. They give me indigestion.

All-in-all, Come Sundown is a decent book… if you have ovaries and like to wallow in mawk. Not every female does. Men don’t either. The scenery is beautifully presented and Montana comes across well in the story. There was great potential in this plot-line but Nora has opted to go with what works for her. It wasn’t for me.

Sult scale rating: 6 out of 10. Recommended for any who want soppy romance and Oprahesque conversations with squelchy monologues. Not for real men as your testicles will reduce in size and climb up into your stomach for 1 week. Your penis will look up at you in confusion. Don’t do that to your penis. 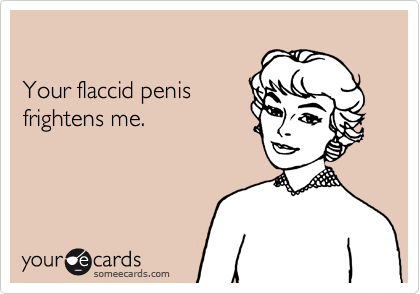