The stupidly grinning buffoon above is the British Labour Party politician and Zionist activist, John Mann. Although he looks as if he should be doing gaudy second-rate stand-up at Great Yarmouth during the waning summer months, Mann is a notorious supporter of Israel. So, instead of being an embarrassingly poor ventriloquist with a freaky puppet on his lap that tells inane jokes about the toilet, Mann is less than that and gives every appearance of being a facile dummy with Israel’s hand shoved up his ass.

It was on 28th April, 2016, that Mann infamously accosted British Labour MP and humanitarian, Ken Livingstone, in which John Mann accused the 70 years old Livingstone of being a ‘Nazi apologist’ and a ‘fucking disgrace’.

The entire encounter was a set-up, and T.V. cameras were there to record the verbal insults to Ken, a former mayor of London. The Zionist, Mann, can be seen in the video (which follows shortly), glancing repeatedly at the cameras as he shouts and rages at a calm and extremely patient Livingstone.

Livingstone had previously claimed that Hitler “was supporting Zionism before he went mad and ended up killing six million Jews”. Historians of the Holocaust agreed with the substantive point, made by Livingstone, that it was Nazi government policy to allow some German Jews to leave the country in the 1930s in order to travel to Palestine with a view to establishing a sectarian Jewish state. Of course, the Nazis did then rescind their earlier approach and proceeded to engage in the bloody genocide that we all know of so well.

Additionally, other notorious Zionists of that time, such as the terrorist Avraham Stern, petitioned the Nazis for weapons, stating their desire to fight on the German side against the British during the war if the Nazis would only guarantee a future Zionist state. Livingstone was factually correct in his assertions, much to the displeasure of the Zionist politicians and media who proceeded to lambaste him for his honesty.

Following this incident, Mann was allegedly reprimanded by Labour’s chief whip, Rosie Winterton,  with the party spokesperson saying that she had told Mann that it is ‘completely inappropriate for Labour members of Parliament to be involved in very public rows on the television’.

John Mann is known to have strong associations with a group called the North West Friends of Israel, which is an organisation set up in the summer of 2014 to advocate for Israel, allegedly fight ‘anti-Semitism’ and counter BDS.

ABOUT NORTH WEST FRIENDS OF ISRAEL

North West Friends of Israel (NWFOI) is a grassroots organisation that exists to advocate for Israel in North West and beyond and also to fight and expose alleged ‘anti-Semitism’ in the UK and elsewhere.

(photo is of ‘Rikki’, committee member of North West Friends of Israel)

John Mann has previously participated in a question and answer session organised by this Zionist group. Also on the panel was Ivan Lewis, yet another British Labour politician who is also rabidly Zionist. The following tweets by John Mann are in response to some of those from Ivan Lewis (Zionist and member of Labour Friends of Israel):

The first tweet shown is extremely important in demonstrating the campaign within the British Zionist movement to equate anti-Zionism with anti-Semitism. Given that most Palestinians are Semites, we can clearly see the absurdity of such a suggestion. Yet, even attempting to equate anti-Zionism with anti-Judaism is also grossly inaccurate and misleading. Such a vile tactic is being used, incessantly, to provide Israel with an immoral shield behind which they can continue to implement their Apartheid strategies towards, and their ethnic cleansing of, the indigenous people of Palestine.

In 2012, Ronnie Fraser, who is director of the Academic Friends of Israel (AFI), launched a court action against the University and College Union (UCU) on the basis that it was ‘institutionally anti-Semitic’ and that he had been harassed because of his ‘protected’ characteristics of race (Jewish) and religion of belief (Jewish).  The case was instigated after democratic union bodies discussed various boycotts of Israel.

About The Academic Friends of Israel

The Academic Friends of Israel was formed in 2002 to fight the academic boycott of Israel and anti–Semitic incidents on University campuses as well as the anti-Israel policies of the UK education unions. The AFI is not affiliated to any political party or any religious grouping either in the U.K. or Israel and works closely with the Board of Deputies for British Jews and the Union for Jewish students.

1.       To fight the academic boycott of Israel and all other forms of anti-Semitism in the UK and International academic and scientific arenas.

2.       To monitor and react to the anti-Israel polices and statements in the UK and International academic and scientific arenas.

3.       To ensure that Israeli academics and scientists are included and accepted in global academic and scientific circles.

4.       To regularly update members as to problems regarding Israel, the Unions, Students, anti-Semitism at Universities and colleges.

5.       To monitor and react to the policies of the academic Trade Unions towards Israel and the Jewish members of staff.

7.       To provide a support network for AFI members working in UK higher education.

In June, 2016, Mann was invited by the American Jewish Committee to inform their annual congress of his parliamentary work as Chair of the All-Party Parliamentary Group Against Anti-Semitism (PCAA). To do this Mann received  a donation from said US Zionist organisation to the amount of £4500. This was said to be necessary to cover the cost of his flights to and from Washington DC, including one night’s stay. Nice work if you can get it…

To provide some context for the American Jewish Committee (AJC) it should be noted that in October, 2011, the AJC issued a joint statement with the aggressively Zionist Anti-Defamation League urging American Jews to support a Joint Unity Pledge stating, ‘America’s friendship with Israel is an emotional, moral and strategic bond that has always transcended politics.’ The statement continued ‘now is the time to reaffirm that Israel’s well-being is best served, as it always has been, by American voices raised together in unshakeable support for our friend and ally.’

John Mann once referred to the horrific massacre of civilians in Gaza, by Israeli forces, in 2014 thus, ‘last summer’s conflict between Israel and Gaza.’

We can see the mindset of John Mann, when he refers to the slaughter of more than 1600 civilians in Gaza, by Israel, as a ‘conflict’, even though Mann was well informed of the true nature of that murderous assault.

On January 6th, 2017, John Mann was among a delegation from the All Party Parliamentary Group for Combating Anti-Semitism (PCAA) that visited Israel and the West Bank.

The delegates held meetings with a number of ‘experts’ and senior politicians in Israel to discuss anti-Semitism. During their visit to Israel’s parliament, the Knesset, the British politicians met with senior Israelis, including Yair Lapid, the leader of Yesh Atid, and Knesset Speaker Yuli Edelstein.

Britain’s Ambassador to Israel, H.E. David Quarrey, and the PCAA joined the Knesset Committee on Diaspora Affairs to discuss British parliamentary efforts to address anti-Semitism and hate crime. In a strident statement for Zionism, Quarrey advocated a greater flow of students moving between the UK and Israel for university studies as the best tool to tackle anti-Semitism at university campuses across Britain, He also said that the numbers of Israelis enrolled at UK universities “are down significantly”.

To ‘balance’ the visit to Israel and its Parliament during the January 2017 junket, the British delegation of MPs went to the occupied West Bank. Whilst there, they visited… wait for it… are you ready… a football association.

As the Zionist John Mann has repeatedly claimed, anti-Zionism is being used to hide anti-Semitism. What he is referring to is not anti-Semitism but, more specifically, anti-Judaism. He may have a valid point, as there are certainly those individuals who are truly anti-Jewish within British society. However, Mann’s pro-Israeli activities give lie to the fact that the only thing that PCAA is concerned with is anti-Judaism. The various groups that John Mann has concerned himself with are all strongly Zionist.

And so it is, that as those who are anti-Jewish may indeed sometimes hide within the anti-Zionist movement, they can be found relatively easily, as they are almost always blatantly opposed to numerous other ethnic and religious identities.

Yet it is no secret that there are those, such as John Mann, who hide their forceful Zionist agendas behind the noble mask of fighting anti-Judaism. These individuals are many and powerful and have the benefit of media support and government backing from both the UK and, of course, Israel.

Which, do you suppose, is the group that poses the greater danger to innocent life? 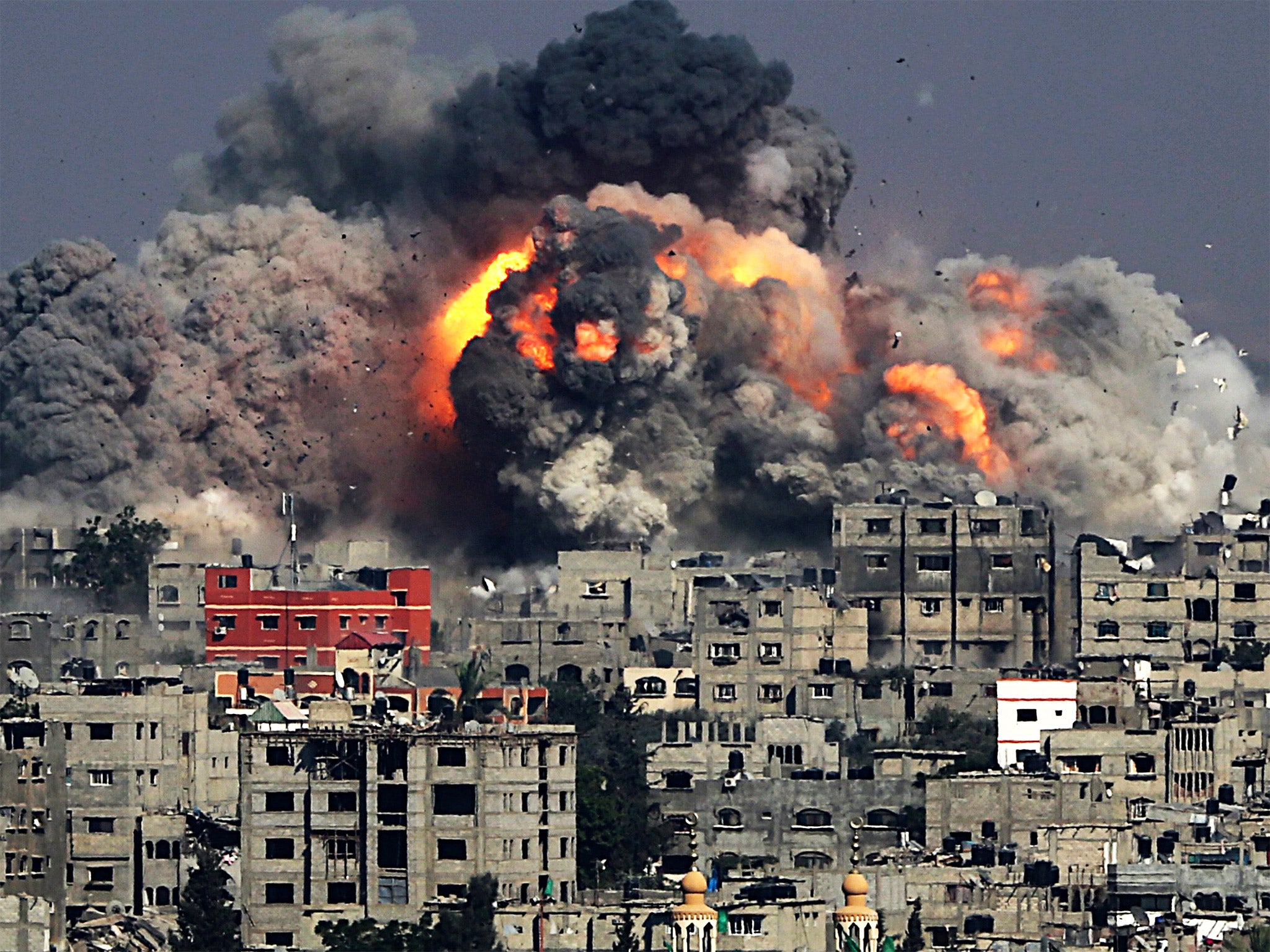 (Israeli attack on a civilian area of Gaza)