Lately, a regular contributor to this blog was telling us about a recent ban that was forced upon him by Facebook. The exact reasoning for the ban was never made clear and he is none the wiser as to why it was imposed as his activities had not changed. The ban centred around a prohibition upon commenting upon, posting to, or joining groups only. He is not the only person to have been banned by the social media giant for obscure or undivulged reasons.

Previously, the same person was blocked by the social media behemoth for stating that Israel should not exist. Should an individual express a similar belief regarding Ireland, or the UK or even the US, no such action is taken. In the world of Facebook, Israel is special.

In the aforementioned case, our contributor was responsible for posting a small number (3) of articles to Facebook groups over three days. All 3 articles were part of Rebel Voice‘s popular Know Your Zionist Enemy series. All 3 were distributed to pro-Palestinian groups. All 3 were perfectly legitimate criticisms of individual Zionists within the Entertainment Industry. It appears that all 3 were somehow unacceptable to certain powers-that-be in Facebook.

Upon giving the matter some further thought, the Rebel Voice contributor remembered the following article concerning a leak of Fb information.

The English newspaper, The Guardian, received a large cache of leaked files from Facebook, in the summer of 2017, exposing certain rules that are applied when moderators of the social media giant are tasked with reviewing complaints and adherence to protocols, as well as the protection of certain groups within society.

One of the groups that is not ‘protected’ is ‘Political Ideology’. The relevant segment from the Fb file is shown below. Zionism is not included in this category, yet it is certainly a political concept with both religion and racism mixed through. 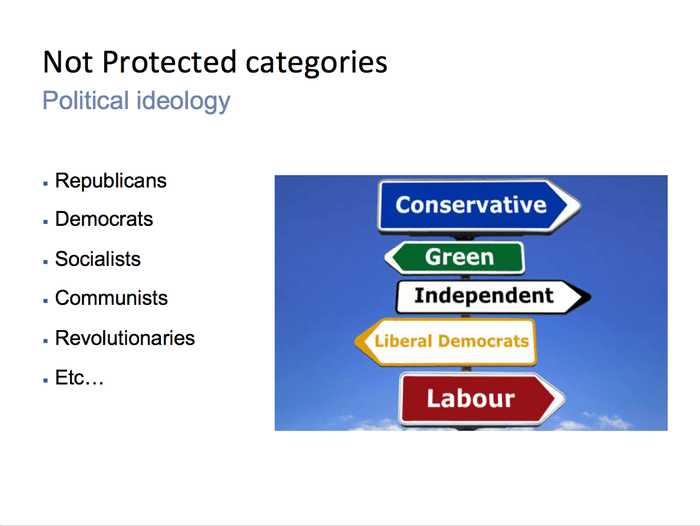 In Forbes digital magazine on 22nd May, 2017, journalist Kalev Leetaru pointed out that, ‘Threats against “Zionists” are prohibited…‘

Facebook has evidently created a policy whereby Zionism is afforded special protection as we can see from the following excerpt taken from the leaked Facebook files. 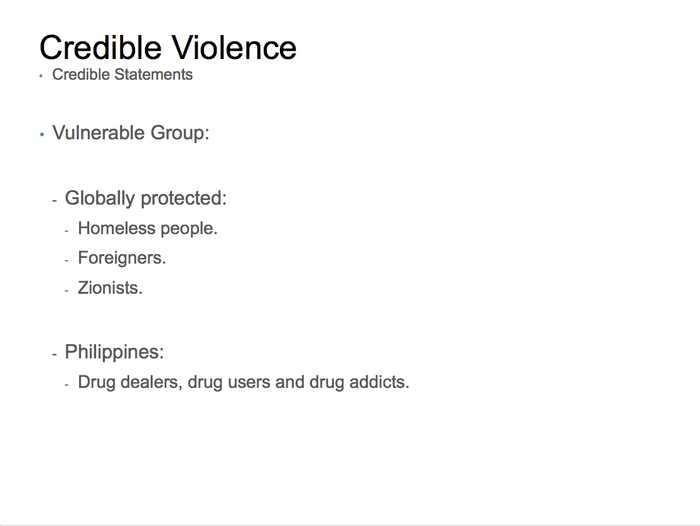 From this, we have incontrovertible proof that Facebook is protecting Zionists in a way that is not extended to those who follow other ideologies. It even has global protection that extends across all nations in contrast to other infringements that are judged on a nation by nation basis. Apparently, Facebook views Zionists as a ‘Vulnerable Group‘. It is doubtful if the people of Palestine who have had their land and livelihoods stolen by Zionists would hold the same views.

So what does this mean for those who oppose Zionism?

The truth is that Facebook is a Zionist entity. That does not mean that every employee supports Israel. Nor does it mean that they don’t. It means that the company founded by Mark Zuckerberg is Zionist.

Zuckerberg has previously described himself as atheist, but today is regarded as a theist although which creed he follows (if it is one) is unclear. He is still known to recite the Jewish prayers that he learned as a boy when in need of spiritual assistance. Yet his Jewish identity is no guarantee of a Zionist philosophy. There are many Jews who are strongly opposed to Zionism. They are people who have courage and conscience. There are other Jews who are ‘moderately’ Zionist, and opposed to any occupation of the remainder of Palestine in the West Bank, Gaza and East Jerusalem.

But Mark Zuckerberg is known to have strong relations with the Israeli government and state. His company operates there after all. It is conceivable that Zuckerberg still suffers from the indoctrination that many young Jews undergo with regard to the concept of Zionism and, yet many struggle and succeed in casting off those immoral shackles, he remains true to the supremacist ideology that he considers a major part of his specious Jewish identity.

Whilst remaining elusive regarding his views on the existence of the Israeli state and its brutal actions, in 2016 Zuckerberg’s company hired Jordana Cutler, who was Chief of Staff at the Israeli embassy in Washington D.C. Cutler is also known as a longtime adviser to the war criminal, Benjamin Netanyahu. She is now Head of Policy and Communications at Facebook’s Israel office. Facebook has since stepped up its censorship of pro-Palestinian activists in both Palestine and beyond.

Many pro-Palestinians have found themselves incarcerated in Facebook jail for posts that are widely regarded as innocuous. Others, such as the gentleman mentioned at the beginning of this piece, are left to guess as to the exact reason why they have been silenced. It does not bode well for the future. One facetious question that springs to mind is this; if a person is incarcerated in Facebook prison for political reasons, then is that citizen officially a Fb POW?

Today, Facebook has approximately 2 billion users making it one of the largest media platforms on the planet. It has enormous influence on societies across the globe. It is still growing.

When massive media outlets, such as Fb gain that level of power, there must be an independent regulator to ensure that no inappropriate bias is created that could affect politics, economics and social matters. Currently, no such effective global watchdog exists, with one exception. You.

The only people who have power over Facebook are those who use Facebook. Should Zuckerberg’s company prove to be involved in promoting immoral ideologies, such as Zionism, which they do by their proactive stance, then it falls to the people to act. If Fb becomes too big, and exists without true competition, then the danger arises that citizens will have less desire to abandon it regardless of its many improprieties. Businesses rely on Fb. Families rely on it for contact. Some people, unfortunately, need it for friendship and socializing. Facebook is digging its claws ever deeper into the psyche of the world’s population. That cannot be healthy.

Zionism is a despicable ideology that should be vilified for the scandalous concept that it is. It should not be protected, least of all by a corporation that prides itself on free speech and independence. We can’t be sure when it happened, but today Facebook is a fully confirmed Zionist entity. Pro-Palestinians must be wary of the future.

What follows is a short article about further developments surrounding Facebook and its relationship with corrupt state agencies. Whether it is the war criminals of Israel, or the war criminals of the US federal government, Facebook appears to be only too happy to comply with their demands for greater access to the social giant and its users. In this respect, Facebook is fast becoming an extremely large and highly efficient intelligence gathering tool that we all seem to feel the need for in our increasingly scrutinized lives.

Are we sleep-walking into a dystopian future where privacy is for the privileged?

Facebook is on its way to becoming the greatest Zionist and Imperial enemy that the world has ever known. How to respond?