Recent news of the seizure of bonfire material for Republican pyres to commemorate the introduction of internment in the Occupied Six Counties (OSC) in 1971, has served to highlight the great injustice that still exists at the heart of the sectarian statelet here.

In the period from 2011 until 2011, the NIEA (OSC Environmental Agency) have stated that they received 158 reports of bonfires across this region of Ireland. That is approximately 30+ massive bonfires per year.

However, the Fire Service stated that officers were deployed to 133 incidents relating to Unionist bonfires this year, 2017, alone. That’s said to be a 50% increase on the same period last year.

Additionally, images and effigies were displayed and burnt in an offensive context on many of these fires of sectarian and racial hatred. Paramilitary involvement was rife in the building of such massive structures, and much damage was caused to buildings and public property. 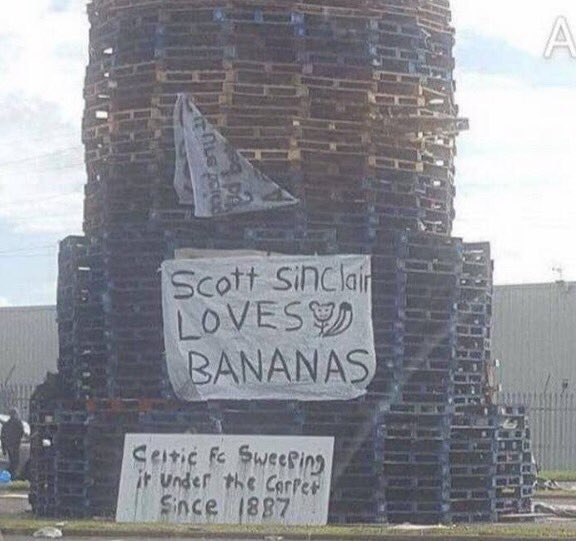 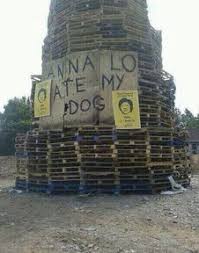 Every year Unionists are permitted to erect their bonfires regardless of the danger to the community and the illegalities involved. The PSNI defend such locations from understandably disgruntled Republicans who may wish to put an early match to them. Unionist politicians support the tradition of hatred expressed through the bonfires. They regularly attend such drunken gatherings and cheer with those assembled, many of whom are little more than sectarian rabble.

Yet when Republicans attempt to build a modest pyre in commemoration of a more recent event than that which the Eleventh Night debauchery remembers, they are stopped. Internment bonfires have never been huge or dangerous. They are small in number and size, expressing a respectable desire to mark the vile introduction of imprisonment without trial of Nationalists in the OSC.

Internment still exists today in this corrupt statelet. Attempts to highlight such an injustice are more relevant than ever. Yet the colonial authorities, and those within Nationalism who would now bow to colonial demands, step forward to prevent any such commemoration. Such moderate Republican pyres could be erected in a safe manner and as a community-led event, helping to educate younger members of society as to what exactly took place before they were born. And what could happen again if they let it.

When the ill-fated Belfast (Good Friday)Agreement was signed in 1998, one of the central tenets was parity of esteem. This simply means equal rights for everyone, with everyone to be treated equally.

If Unionists are allowed hundreds of bonfires each year, many of which are breaking  their own colonial laws, yet Republicans are not allowed any, then Rebel Voice feels that the question must be asked, is that parity of esteem?

The regrettable violence that has broken out in the Markets, Short Strand and Falls, is surely understandable given the obvious imbalance in the matter of bonfires, and the prejudicial treatment of both communities by the colonial system.

Some former Republicans have foolishly rushed to issue blanket condemnations of the impulsive action undertaken by those locals who expressed justifiable outrage at their ill-treatment by the state. Yet isn’t that exactly what many of the leadership within Sinn Féin did almost 50 years ago? With all that is taking place today, the question must be asked of the Sinn Féin leadership, what really has changed for Republicans in Ireland?

No matter how hard the current Sinn Féin leadership may wish it to be otherwise, the Six County state is rotten to the core and always has been. This is exemplified in the manner in which Unionist bonfires of hatred are allowed to proceed whilst Republican pyres of remembrance are not.

Pandering to the Orange whim may seem like a clever move for Sinn Féin in the short term, as the leadership crave ever greater acceptance within the colonial system. But Unionism has not progressed sufficiently to embrace equality. Unionists are not ready. Unionists have not learned from their past mistakes. The leaders of Unionism have not had a sufficiently strong lesson in good manners put upon them.

Furthermore, as can be seen from the debacle of Brexit – which is in itself yet another breach of the Belfast Agreement – as is the steadfast refusal of Unionism to give appropriate respect to the Irish Language (which is of course the only native language of this country), it can be stated that the imbalance that exists in the matter of parades, bonfires and Orange traditions of sectarian supremacy is clear proof that we have one hell of a long way to go in installing true parity of esteem, in this sordid statelet that never should have been.

England has long been known as Perfidious Albion. Perfidy is treachery. Therefore, that’s a title that the English, and then British, Establishment have earned many times over as they reneged on one treaty after another, one agreement on top of the last. The Belfast Agreement is no different.

The brief uprising in Belfast over the removal of bonfire material in Republican areas should not be viewed solely as a reaction to one or two localized incidents. Instead, it should be understood to be a predictor of what is waiting not too far down the line, should the current trend of discrimination against Republicans and Nationalists continue.

Whether that discrimination is in the matter of current internment, abuse of POW’s, harassment of Republicans, funneling of public funds into the coffers of Unionist paramilitaries, facilitating Unionist corruption in political life, granting immunity to Unionist’s involved in racism and sectarian bigotry, granting immunity to British soldiers guilty of crimes including murder, withholding investment in Republican areas that suffer from social deprivation (such as those areas where the recent trouble arose), withholding information that would provide answers to those families who lost loved ones to British collusion, encouraging and facilitating Orange (and therefore sectarian) ‘culture’, or in general maintaining a clear bias against the Republican and wider Nationalist community, it must be highlighted and opposed.

Nationalist politicians, most especially those in Sinn Féin, must be made to see that wishing upon a colonial star is not going to bring equality, let alone free our land. The Tories need to be called out, as do the leaders of Unionism. They should be given no quarter as we can be certain that they, in keeping with their traditions and culture, will afford us none.

So let’s all have a large slice of parity of esteem. It just might be that the leaders of Unionism will choke.