The Road   by Cormac McCarthy

Readers may be familiar with this particular story-line, having watched the movie adaptation starring Viggo Mortensen and Kodi Smit-McPhee. I will confess to not being among that number who have viewed the silver-screen’s take on the tale. I’m not sure that I ever want to either, since reading this book. 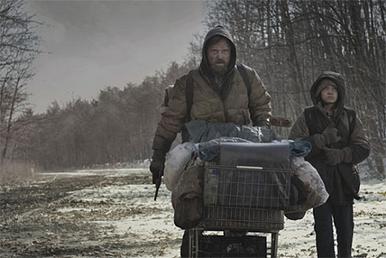 Don’t get me wrong. My reasons for avoiding the movie are not because the story-line, as set out in the book, is so bad. It’s because it’s so good. This is a novel which can affect a person. It’s an engaging read and worthy of all the many plaudits that it has received, including the Pulitzer Prize. It’s also incredibly tough to handle.

The United States is in ruins in this post-apocalyptic presentation. The exact reasons for said apocalypse are never revealed and the cause is unimportant. McCarthy’s approach to this is exceptionally clever and beautiful. We are immediately thrust onto a land that is covered in ash and devoid of most life, save the human – and inhuman – survivors, and the occasional animal. 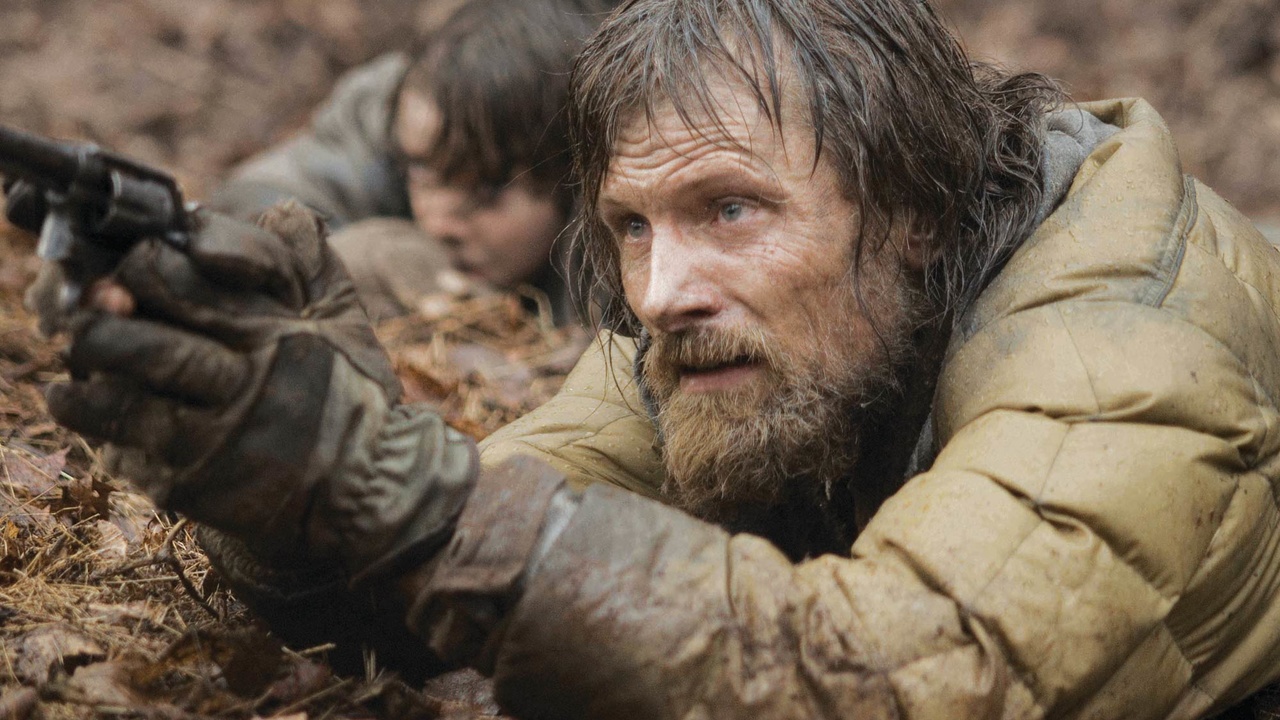 This setting and plot is about as dystopian as its gets, and that is really all that matters regarding the back-plot. No further explanation is necessary, as knowing will not change what has taken place. The two central characters are referred to only as ‘the man‘ (or ‘Papa’) and ‘the boy‘. Names appear to have little relevance in such a barren world and everything is reduced. The two painfully move south through the unending desolation. They scavenge whatever they can find as they slowly traverse the ash-covered landscape. Their meagre belongings are pushed along in a rickety shopping trolley.

This terrible new world is a dangerous place. Father and son must try to find food and clean water, as well as seek shelter from nights where the temperatures can fall dramatically, as the sun is smothered by a polluted sky. They have only each other. 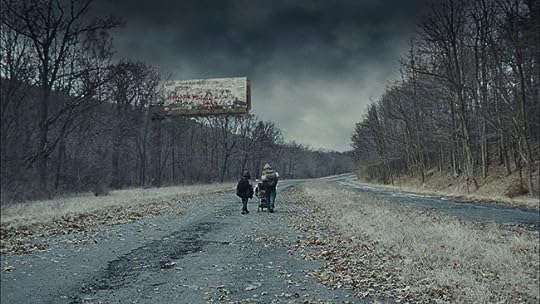 Fresh meat is a luxury few can acquire. Society has broken down and no laws exist but those to ensure survival. Some have embraced cannibalism. Children and babies are eaten with apparently little thought given to the morality that once was. Some such inhumans wander incessantly in search of prey and slaves, their own walking larder. Others lie in wait like trapdoor spiders, luring unsuspecting travellers into imprisonment and ultimately a lingering death. The man and boy struggle ceaselessly to avoid these myriad dangers that seem to be everywhere.

McCarthy’s prose is sparse and direct. Yet there is poetry and a terrible beauty in his descriptions and dialogue. The reader may find themselves unable to look away, appalled as they are at the conditions in which the two are thrust. The man and his son are the proverbial good guys who remain apart from the evil that permeates a desperate world. In doing so, their survival, and the humanity and decency they carry, stands in stark opposition to the base savagery that dominates.

Although The Road is a journey through Hell, it is also an insight into the tender and selfless relationship that can exist between parent and child. We are left wondering who exactly benefits the most from that relationship, father or son, or is it  perhaps a symbiotic bond whereby they give strength to one another. The man has knowledge and strength, he has determination and experience. Yet the boy has gifts that are their equal. He has an unblemished nature, an integral kindness, and much wonderment, as well as a child’s ability to take the little joy left as he finds it. It is the boy’s character that makes survival worth fighting for, for without such decency and beauty, what would be the point of living? 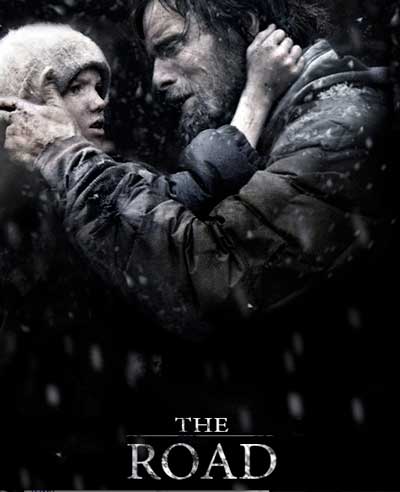 One commentator said of The Road, One of the most shocking and harrowing but ultimately redemptive books I have read. It is indeed both shocking and harrowing. However, I can’t say that I have found it redemptive, yet. The word that I would use to best describe The Road for me, is haunting. One week later and The Road still  follows me. It doesn’t so much touch emotions as rip them asunder. It is a bleak tale in a bleak world, but has a telling of exquisite joy and love.

The almost claustrophobic setting serves to intensify the parent-child relationship to the point where it seems like they are the only two people left. Every word they utter takes on greater significance as they have little else to offer one another beyond their complete love and devotion.

Previously, in the Book Review section of Rebel Voice, I have covered one of the novels from the Walking Dead series, Search and Destroy. In my review, I pointed out the horrible reality that accompanies such an apocalyptic event; namely, that the children of the world would suffer terribly before an untimely death. Most movies, TV shows and novels tend to gloss over this truth as such would surely discourage citizens from embarking upon this latest global fad.

Yet McCarthy has not glamourised the breakdown of society. He has not sanitized an apocalypse. He has not sought to put spit and polish upon a cataclysmic event that would kill billions. The Road is a honest depiction of what life would be like for the best among us, should the idiots among us decide to take their warmongering and pollution and bluster too far.

The aftermath of any ending of civilization as we know it would be nothing like the ornamented Hollywood versions that fill our screens most regularly. Instead, it would be brutal, barbaric, barren and base. Life would become so cheap as to be worthless. Children are the ones who would suffer such a reality the most.

For his honest portrayal of this truth, I thank Cormac McCarthy immensely. I only wish that those in danger of destroying our beautiful planet were forced to read The Road. Perhaps then they might better understand that they have no right to play dangerous games with our world and our futures.

I would like to tell you more about the entire plot of this novel, but no. The Road demands to be read clean and clear. I can only say that, while I found good emotions when immersed in the lives of the man and boy, the over-riding feeling was not one of redemption. What I felt, haunted as I was by Cormac McCarthy’s stylish masterpiece, was an overwhelming despair at what is possible should we concede control to imbeciles, as I fear we have.

I often wonder if, because such stories are imagined and then penned, do they exist somewhere in our infinite universe. After all, an infinite universe has infinite possibilities. It’s a scary thought. Yet it can also be an inspiring one. By virtue of the possibility that such sadness and horror may exist elsewhere, so too must there then be a corresponding quantity of happiness and beauty. Is that what existence is, a balance of all, everywhere?

The Road is a must for serious readers. It’s so important that it should be placed on the curriculum of schools across the planet (and all other planets..). It should be produced with heavy iron covers so that it can then be used to bash the stupid skull of every head of state, every CEO and Board member of a capitalist corporation, every greedy and callous individual who would blithely  disregard our fragile societies, our tender ecosystems, and our complex and necessary lives.

I pay can The Road, and Cormac McCarthy, no greater compliment than to state that I don’t think that I will ever read this book again. I won’t need to, as I feel that it will stay with me forever; such is its power.

Perhaps I may weaken – or strengthen – some day, and relent enough to watch the movie. But perhaps not. I both hope and fear that the man and boy will haunt my dreams, reminding me of the complex majesty of the human species, and the vile terror of what can happen when we go wrong.

The Road is real.