The Exorcist – Out of The Shadows by Bob McCabe

When The Exorcist movie was released in 1973, it sent shock-waves across the Western World, not just in cinema, but throughout society. Among those multitudes who went to view this film sensation were some who fainted and others who fled the cinema to be physically sick. There were those who were committed to asylums having seen it, and others who took their own lives as well as those who carried out horrendous murders on back of seeing this film. The movie created a wave of hysteria that made it perhaps the single most influential, and shocking, picture of cinematic history. The paying public loved it.

In The Exorcist – Out Of The Shadows, the author takes us on an exploration of the making of the movie, from William Blatty’s novel, to his idea for a movie adaptation, through the production process, filming, release and place in history. Within the pages of this book you will find information of interest, whether you’re a fan of that particular movie, the sequels, the parodies, the film-making process, religion or horror. For example, did you know that the Catholic Church championed this movie from the get-go?

William Peter Blatty, author of the original book, The Exorcist, and producer of the movie, is Catholic and, at one time, gave serious consideration to becoming a priest. When he conceived of the idea for a fictional story based upon an actual exorcism said to have been conducted in 1949 in the Mount Rainier District of Maryland, Blatty wished to remain true to the actual story, with a strong emphasis on the role of the Church which appears as a virtuous organisation. It’s easy to see why the Catholic hierarchy would be OK with such positive propaganda.

In his search for a director, Blatty sought out William Friedkin, who had won an Oscar in 1972 for directing The French Connection. Friedkin was secular Jewish, but relished the idea of taking on the portrayal of a Catholic exorcism, even toying with the idea of converting to the faith such was his immersion in the project. Friedkin approached the concept of exorcism with the eye of a documentary maker, which was perhaps one of the reasons why the movie shook audiences so much.

The movie had as its adviser on all things Catholic, Father John Nicola, as well as Fathers Thomas Bermingham and William O’Malley, who both had parts in the actual film. These Catholic ‘guardians’ ensured authenticity throughout for Friedkin. Of the remaining lead actors, Ellen Burstyn had been recently Oscar nominated. She took on the role of Chris MacNeil, mother to the possessed child. Max Von Sydow (or Ming the Merciless as he will forever be remembered by many) played the part of Father Merrin and brought his unique character to a table overflowing with talent.

Father Damien Karras is the central priestly role in The Exorcist, and Friedkin went with the relatively unknown Jason Miller, only child of an Irish Catholic family from Scranton, Pennsylvania. Miller had spent three years studying for the Jesuits before a crisis of faith caused him to drop out. His background and his spiritual self-doubt made him perfect for the role of Karras who is tempted and tortured by a demon who seek out the weaknesses in men. It was an inspired piece of casting by Friedkin.

Finally, there is Linda Blair, who played the part of the possessed girl. Blair was a 12-year-old catalogue model when she got the role of Regan MacNeil. Her genuine innocence lent itself to the part, although even film-crew members were embarrassed to hear such foul language come out of the mouth of such an endearing child. For a young girl, Blair’s professionalism was exceptional and she rightly received great praise for her on-screen abilities. 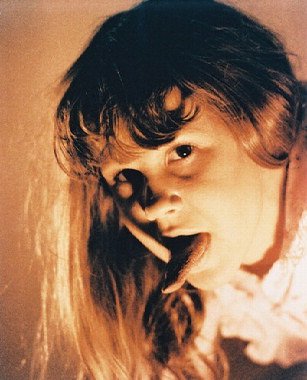 Out Of The Shadows takes us through the filming process, from locations to props to special effects and make-up, to the much talked about ‘Curse of The Exorcist’. We read of the disputes between those on-set, including Friedkin’s slapping of a priest to provoke an emotional response that would help his onscreen performance. There are injuries, fires, legal actions, accusations and recriminations. Ultimately, the film was completed, way over budget it must be said, and received 10 Oscar nominations although took home only two – Best Adapted Screenplay (Blatty) and Best Sound Mixing (Robert Knudson and Chris Newman).

The Exorcist – Out Of The Shadows is an informative book that may help you relive the first time you saw the movie. It can be fascinating to get a look behind the scenes of such a monumental project. It may also colour how you view the movie in future. Perhaps now you will no longer fear the possession of Regan MacNeil. The again, just maybe the truth will terrify you even more as there’s now no place to hide. Rebel Voice hopes you sleep well after reading this book. Enjoy.

Sult scale rating: 8 out of 10. This is a fine presentation upon the cinematic masterpiece that is The Exorcist. It contains interviews, facts and titbits as well as gossip. It dishes the dirt in a way that will entertain. Watching The Exorcist might never be the same again. Pazuzu told Rebel Voice to say that.