The Girl With All The Gifts   by M.R. Carey

Some of you may be familiar with this story from the movie of the same name starring Sennia Nanua, Gemma Arterton and Paddy Considine. I confess to not having seen it and was oblivious to the story when I first picked it up. What a pleasure it turned out to be to discover this novel as I did.

Melanie lives in a cell. It’s all she’s ever known. She gets to go to class most days and her favourite teacher is Miss Justineau. She doesn’t really have an opportunity to get to know her class mates as they are all restrained in wheelchairs. Yet they are able-bodied. Melanie is ten and has a very high I.Q. Her captors fear her, especially her bite.

Miss Justineau is different from the other adults there. She bonds with the children, especially Melanie. When the vile Dr Caldwell selects Melanie for testing, the kind of experimentation that some of Melanie’s classmates have never returned from, Miss Justineau intervenes to save her favourite’s life.

We learn then about the horror of Melanie’s captivity and the dire circumstances in which the characters find themselves.

There are spoilers from this point on.

Melanie is a flesh-eating zombie. So are her class mates. Yet she doesn’t initially realize that she is an avid consumer of human flesh. She likes to read. She likes to dream. She believes herself to be a normal little girl who lives as every other little girl lives. It’s what she knows.

The Girl With All The Gifts is set in a post-Apocalyptic England, as the human race is destroyed by a fungal infection. As zombies roam the streets and countryside, isolated populations of survivors struggle to stay alive. But the odds are against them.

Melanie and the other children are special. They do have the primitive savagery and strength of the typical zombies but are also sentient and sympathetic. They can communicate and organise, which makes them infinitely more dangerous than the adult version. It is their place, between human and zombie, that draws the scientists to them. They are captured to become experimental subjects to be cut and poked and prodded. But Melanie has feelings beyond hunger and rage. She loves Miss Justineau as if she were the mother that she knows she lost, and Miss Justineau feels great love for Melanie.

As the compound, where Melanie is imprisoned, falls open to the zombie hordes, Miss Justineau, Melanie, Dr Caldwell, Sergeant Parks (who despises the children) and Private Kieran Gallagher escape and set off for Beacon, the last bastion of humanity in England (note that Whitehall was not selected for this honour…)

As the not-so-merry band move through the countryside, they encounter many dangers, and questions within themselves. Melanie also has unique questions about her existence and self. It all makes for a gripping and layered tale.

Rebel Voice has previously railed about the current fad for zombie movies and books. It has been stated, here, that the literature does not take into account the full horror that would be visited upon the young after such a monumental event as Apocalypse. A review of The Walking Dead – Search And Destroy is contained on this site. In it, the fact of what would happen to the children during any zombie apocalypse is mentioned. Cormac McCarthy’s The Road is also reviewed by Rebel Voice. Although there are no zombies in that particular beautiful and haunting tome, it does deal with the effects of such a catastrophe upon one child in particular.

The Girl With All The Gifts is the book that should have been written long ago (it was published 2014). The book takes the dystopian truth of The Road and combines it with the world of The Walking Dead. In doing so, it demonstrates clearly just how terrible an apocalypse of this nature would be for the most vulnerable in our societies. Children would suffer more than any others. Yet, still the morbid fascination for zombie tales continues unabated.

This bloody fantasy should give cause for concern for those who understand human nature. The is also the little matter of life imitating art. Today, we can see how the Big Brother of Orwell has become a reality. We now use some of the technology (sliding doors and handheld communication devices complete with pictures, for example) that was portrayed in Star Trek when it was deemed so far-fetched at that time as to be laughable.

It can be considered that fiction does drive fact. Given that we live in an increasingly crowded world with chemicals saturating our land, livestock and bodies, no one really knows what diseases and viruses lie in wait for us in the future. The current predilection for zombie culture may be a harbinger of something horrific that we, as a species, bring upon ourselves as we sleep-walk though an apathetic world.

As Homo Sapiens rushe headlong into a questionable future, literature provides direction. There are many who crave the idea of an apocalypse, zombie or otherwise. They have become inured to the terrible reality that would accompany that event. It may be that too many have become disconnected from the truth and are blithely hoping for drastic change, forgetting the horrid nature of how the people, but most especially the children, would suffer and die. We are shaping societies full of sociopaths. Such callous innocence will not make for a better planet.

Yet, in The Girl With All The Gifts, we get a wake-up call. This story is a reminder of how bad it can get. It’s a whisper of all that we will lose. The story is so effective in relaying the message that an apocalypse is to be avoided at all costs, that it should be compulsory reading for all teenage students. It would serve to place a brake upon the young minds that will inevitably shape our future. Hopefully, that future will not have anything remotely similar to zombies (I have concerns about the current mental health of Israel, however).

As Melanie’s small team approaches London, things tear apart for them. They come to understand that there is no real escape. The spores will win. In this, the book resembles Richard Matheson’s I am Legend. Both novels conclude that an acceptance must be made that humanity will not survive and, instead, something else will take its place. Melanie’s kind will triumph and rule. Spare a thought for poor Miss Justineau, though.

Rebel Voice has declared this one of its favourite novels to date, because it puts a sore and much-needed lesson of manners on all other zombie stories. The Girl With All The Gifts takes the children, previously neglected, and places them front and centre in our affection and our lives, where they deserve to be. 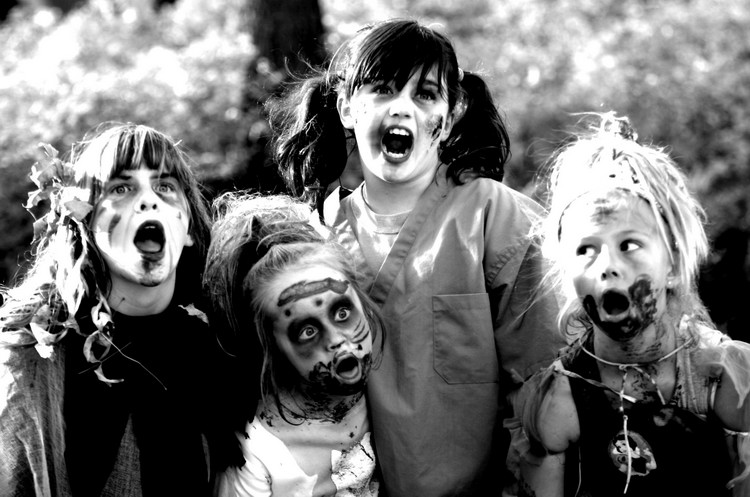 (Halloween is almost upon us. How many little monsters like this will be knocking on your door looking for assistance in rotting their teeth. Give them apples and watch their little zombie smiles disintegrate)

As the novelist Martina Cole has said of this book, ‘If you only read one novel this year, make sure it’s this one.‘ Rebel Voice strongly agrees.