In this episode of the Rebel Voice series, Know Your Zionist Enemy, we have again decided to provide readers with two for the price of one. In this instance, the Zionists are father and son. Both are extremely well known, successful, and influential in the Hollywood movie industry.

It can be seen from the following article, that many Hollywood Zionists are quite blatant in their unadulterated support for the rogue state of Israel. Others chose to remain behind the scenes in this respect. They are all dangerous to the lives and welfare of the people of Palestine.

On we go now, in our journey into the Zionist lives of both Kirk and Michael Douglas.

Kirk Douglas was born Issur Danielovitch in the area known as Amsterdam in New York, on December 9th, 1916. His parents were Jewish immigrants from Belarussia, which at the time was part of the Russian Empire. It is said that the family were Yiddish speakers, and extremely poor. The family struggled to create a good lives for themselves in the ‘new country’ of the USA. These childhood tribulations understandably shaped the mind and future actions of Kirk Douglas.

The future star of Spartacus had an uncle who had already reached the US earlier than his brother, and had adopted the family name of Demsky, which Kirk’s family took also. Douglas grew up as Izzy Demsky, before changing his name legally upon entering the United States Navy during World War 2.

It became a recurring theme of Douglas’ life in that he viewed himself as a Jew who didn’t see himself as one, before eventually rediscovering his Jewish identity. Movies such as The Juggler (1953), Cast A Giant Shadow (1966) and Remembrance Of Love (1982) all deal with this aspect of his life.

The Juggler was the first Hollywood feature film to be shot in the newly formed political gerrymander known as Israel which was, of course, founded upon the basis of ethnic cleansing and wholesale slaughter of the indigenous people. Douglas has stated that, during his visit there at the time, he saw ‘extreme poverty and food being rationed’, but felt that it was ‘wonderful, finally, to be in the majority’. The producer of the movie, Stanley Kramer, tried hard to portray ‘Israel as the Jews’ heroic response to Hitler’s destruction’.

Sadly, it appears that both Kramer and Douglas were content to overlook the destruction wrought by the rabid Zionists who carved the state of Israel in bloody fashion from the land of Palestine. Both men seem to have ignored the destitution of the indigenous people who were dispossessed of all they owned. Both men turned a blind eye to the massacres of the people of Palestine. 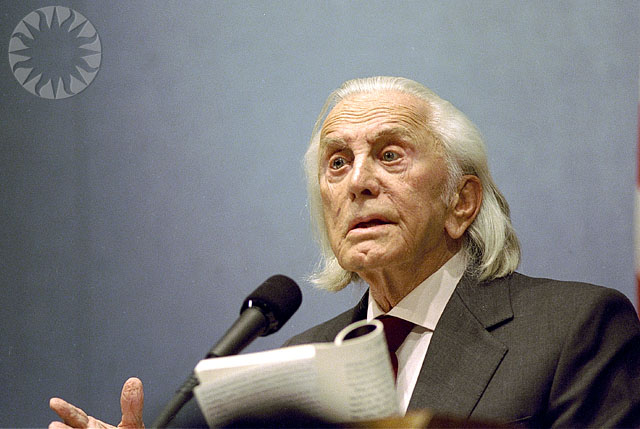 Douglas is known to have been a lifelong member of the US Democratic Party (a misnomer if ever there was one) and has written letters to many politicians who he regarded as friends. He was, at one time, someone of influence in US political circles. In his memoir, Let’s Face it (2007), he writes that he felt compelled to write to former President, Jimmy Carter, in 2006 so that he might forcefully point out that ‘Israel is the only successful democracy in the Middle East…’

As Rebel Voice has consistently stated, Hollywood is all too often used as a vehicle for pro-Israeli propaganda. It should be noted that no better example of such exists than the movie (previously mentioned), Cast a Giant Shadow, filmed in 1966. This piece of Zionist cinema features Kirk Douglas, Yul Brynner, John Wayne, Angie Dickinson and John Wayne.

It centres around the life of real-life Jewish-American military officer, Colonel David ‘Mickey’ Marcus who entered the Zionist gerrymander to command units of the nascent Israeli Defense (Occupation) Forces during the Arab-Israeli War of 1948. The Haganah (Zionist paramilitary organisation) provided Marcus with a false passport in the name of Michael Stone to assist in his travel to Palestine to assist the terrorists of the Zionist regime. The overriding portrayal of Marcus as a hero, is in stark contrast to the truth that foreign terrorists were engaged in a war with those defending the indigenous people from horrific attack by fanatical Zionist invaders.

In the movie, The Juggler, we again get a portrayal of Israel as a morally and ethically acceptable political entity. Such films served as adverts for Israel in the US, and effected the attitudes of many movie-goers, instilling a sense of the righteousness of the artificial Zionist state whilst conveniently ignoring the blood-lust and brutality that accompanied its foundation. Douglas movies, such as Cast A Giant Shadow and The Juggler are early examples of Zionist propaganda, and we can see that Kirk Douglas was there from the very beginning.

Of more recent note is that Kirk Douglas has made numerous donations to the ADL (Anti-Defamation League), which is a strongly Zionist vehicle that regularly uses charges of anti-Semitism as a shield for defending the rogue state of Israel.

When Douglas was approaching his 100th birthday, he received an award from the World Jewish Congress to celebrate both his centenary and unrelenting support for Israel. It is unfortunate that such organisations try desperately to intertwine the Jewish identity with that of the Israeli or pro-Israeli identity. In doing so, Jewish Zionists are behaving in a manner that is ultimately anti-Jewish. Their fanaticism will ensure that future generations of Jewish people suffer from the persecution and discrimination that those of the past surely had inflicted upon them. Israel and Zionism can, in this context, be said to be the enemy of the entire multi-faceted Jewish identity.

Kirk Douglas is an unrepentant advocate for the rogue state of Israel and must bear some responsibility for his role in the suffering of the people of Palestine. He has influenced many in his driven pursuit of acceptance for that immoral political entity that is the Israeli state. He has contributed not only movies, but also personal appearances and money in aiding and abetting the continuance of the crime of Zionism.

Michael Douglas was born on the 25th September, 1944 in New Jersey. He is a strong and very public supporter of the rogue state of Israel, having visited there on numerous occasions.

Douglas Jnr has previously visited US college campuses, with Israeli leader and activist Natan Sharansky, to talk about Judaism and defend Israel. The visits were co-hosted by the Israeli Genesis Prize Foundation, Hillel International and the Jewish Agency for Israel. In undertaking such Israeli PR, Michael Douglas is yet another who is unfortunately tying both the Jewish and Israeli, or pro-Israeli, Jewish identities together. Such a deceptive tactic means that those who justifiably attack the actions of the Zionist state can then be labelled anti-Jewish or, even more inappropriately, anti-Semitic. In this manner, Zionists are using Judaism as a shield behind which they place the Israeli state. It is a recipe for future disaster.

Genesis Prize Foundation Co-Founder and Chairman, Stan Polovets, had this to say about the college visits, ‘This is the first time, in this current period of heightened anti-Israel activity on campus, that a Hollywood celebrity has offered to join with a world Jewish leader to visit U.S. college campuses and speak with students about Israel and the Jewish people… At a time when the academic community and other forces are making sustained efforts to delegitimize Israel, these visits are particularly important and timely’.  Again, we see Jewish and Israel, Israel and Jewish, both inappropriately entwined in the mind of the reader or listener. It is an insidious tactic.

The appearance of both Zionist apologists for Israel was met with protests at Brown University by pro-Palestinian supporters.

In the following, insightful video clip, Michael Douglas refers to Hollywood and states, ‘our industry is a tremendous supporter of Israel‘. The evidence is everywhere. Hollywood is a major centre of Zionist propaganda.

In this next clip we see Douglas, his wife and the Netanyahus fawning all over one another. Viewers are advised to keep a bucket beside their monitor, just in case.

During Michael Douglas’ visit to Israel, in 2015, to accept his award of the Genesis Prize, he described the BDS movement as an ‘ugly cancer’.

And there you have it, folks.