(Gerard Butler with the war criminal, Benjamin Netanyahu and his consort, Sara)

Gerard James Butler was born on 13th November, 1969.He isa Scottish actor, producer and singer. He was raised Catholic of Irish descent. He is a lifelong supporter of Glasgow Celtic football club.

(Readers may remember the beautiful gesture by Celtic’s noble fans when they were fined by pro-Israeli FIFA for flying Palestinian flags at a game against an Israeli club. Determined Celtic fans began to fundraise, and eventually donated the considerable sum accumulated to charities in Palestine)

As well as prominent business, philanthropic, political leaders and other celebrities, @GerardButler attended the… twitter.com/i/web/status/7…—
Friends of the IDF (@FIDF) November 04, 2016

It was in November 2016 that the vile organisation, Friends of the IDF (FIDF), organised a fundraiser for the Israeli military. Why Zionist forces should require additional donations is anyone’s guess, as they yearly receive charity from the US taxpayer. Yet, Friends of the IDF succeed in raising enormous sums to help make life even more comfortable for the Israeli killers of babies and children.

The celebrity bash was held in the Beverly Hilton Hotel in Los Angeles. It was attended by 1200 Zionists from both Israel and the US. Also present were such notably rabid Zionists as Arnold Schwarzenegger, Robert De Niro, Larry King and Gerard Butler. Those who were prancing around the lavish gala were there to demonstrate their unmitigated support for the military forces of Israel. By their presence at the garish event, they also expressly endorsed the actions of the IDF, including the slaughter of Palestinian civilians and children during the 2014 onslaught of Gaza. The event raised $38 million.

17 soldiers (merchants of death) from various units within the IDF – more accurately known as the IOF (Israeli Occupation Forces) – were put on display to impress the slow-witted attendees. These uniformed morons included some US citizens who had decided to move to Israel to become part of the Zionist colonial war machine.

(Gerard Butler posing with members of the Israeli Occupation Forces)

The following year, on 2nd November 2017, Friends of the IDF held their 11th annual fundraiser, again in the Beverly Hilton Hotel in Los Angeles.

The event was chaired by FIDF National Board Member Haim Saban and his well accessorized wife, Cheryl.

The event featured special performances by singer Seal, The Tenors, David Foster & Friends, and Gene Simmons from the antiquated rock band, KISS.
The callous endeavour raised $58 million, the largest ever amassed by the Zionist entity. 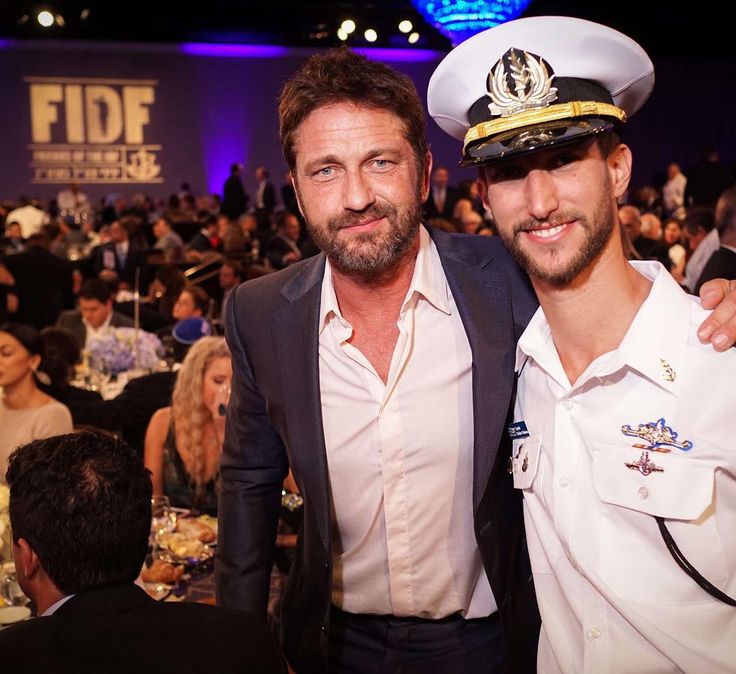 (Gerard Butler again posing, this time with yet another pencil-headed Israeli goon)
No mention was made of, or apparent thought given to, the financial needs of the long-suffering people of Palestine, particularly those in Gaza who are still trying to rebuild their shattered lives after the Israeli bombardment of their homes and neighbourhoods.
It would seem that Gerard Butler has little regard for the suffering and deaths of children and babies, if those children and babies happen to be Palestinian. Instead, he focuses upon raising money for those who perpetuate such carnage upon the innocent.
The Hollywood elite who attend events organized by FIDF are, in their own way, complicit in the wholesale slaughter of Palestinian civilians. There can be no excuse for such a borderline sociopathic attitude to the killing of the young, regardless of who is responsible for such deaths.
Gerard Butler laughs with Benjamin Netanyahu, while the children of Palestine weep, at least the children, that is, who are left alive to shed tears.

– If you care about this issue, please tell others –