Kindred In Death by JD Robb

Lieutenant Eve Dallas is a thirty-something detective with the New York police in the year 2060. It’s as strange future of flying cars, auto-chef machines and fashion straight out of The Hunger Games.

When a 16-year-old girl is found raped and brutally murdered, Eve is specifically requested to take the case. Deena McMaster’s father is an NYPD captain and he wants the best. The killer is good at what he does. He’s believed to be relatively young but disciplined, skilled and completely sociopathic. The feisty lieutenant and her Irish billionaire husband, Roarke, begin to make inroads into the case as pressure mounts for results to be seen. Unfortunately, the killer hasn’t finished. He’s working to a demonic schedule and has others that he wishes to mutilate and kill.

It’s when a second victim is discovered that Eve and her team, including the eminently likable Peabody, begin to fully unravel the twisted agenda that the killer is working to pursue. But, given the number of potential victims, will the cops be able to prevent further deaths? You’ll have to read the book to find out as Rebel Voice has no desire to spoil your enjoyment of yet another JD Robb, aka Nora Roberts, thriller.

Kindred In Death is number 29 in the hugely successful Eve Dallas series, many of which have been reviewed by Rebel Voice. Some of them can be found here:

The New York lieutenant is a fantastic character. She’s tough, resilient, begrudgingly humorous and ineffably sexy. Even though Eve has had a traumatic childhood, being the victim of horrendous physical, psychological and sexual abuse by her own father, she still strives to bring justice and a sense of order to society, perhaps as a means of achieving payback for the horrors that she suffered as a young child. Eve understands the feelings of the victims and works tirelessly to make it better for them.

Each story in this long-running series is well-plotted and Kindred In Death is no exception. Although the futuristic setting may seem outlandish, and Robb’s visions for technological advancement were widely optimistic, the scenery and weird social conventions take a backseat to the story-line, which is exemplary. It can be easy to overlook just how good an author Robb is. It requires great skill to weave a thrilling story that keeps you guessing, as you are swept along in Eve’s life, without it becoming too intense or over-complicated. There is also the not inconsequential matter of tackling emotive and profound topics in a respectable manner, which Robb succeeds at. Her stories appear to have been effortlessly written and are perfectly measured. Each is a joy. 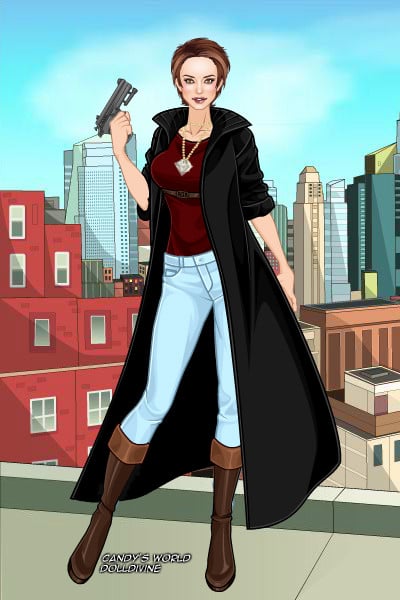 (one fan’s idea of what Eve looks like. It was a she who drew this…)

Of course Roarke is a dose at times. A bucket is a necessity for when he and his wife, Eve, are alone. The pages positively drip with sentimentality during these exchanges. He can’t really be Irish, not with that attitude of his, and is clearly a representation of what the Irish-American Robb would like Irishmen to be. Sorry JD, but we’re a great deal less mawkish yet even more flawed than that. We fart and everything. Some Irishmen – are you sitting? – even scratch their backsides and have smelly feet. However, even oirish Roarke can’t destroy what is a thrilling tale complete with a solid and consistent cast that will leave you aching for the next instalment.

Sult scale rating: 8 out of 10. Excellent story with an impressive line-up of characters. The consistency in this series is amazing, not only in the regular personalities, but also in the quality of the plot-lines which are all well-crafted, presented and executed. Recommended read by Rebel Voice.