Rebel Voice would ask readers to kindly take a good look at the pompous, weasel head on this nasty piece of work. He has just died from natural causes and will be lauded by every half-wit on the island of Ireland for the next month. But will anyone take the trouble to stake him and bury him at a crossroads? No. They never do. Gay Byrne, once prominent TV and radio presenter on Irish airwaves, was symptomatic of all that is wrong with Ireland. He was a pompous, self-righteous, arrogant, self-involved, Free State, Blueshirt, West-Brit who spewed forth condescension at every opportunity.

Byrne has condemned Irish Republicans on many occasions, especially if they happened to be from the OSC. He was typical of Free Staters in that he condemned Republican use of physical force whilst enjoying the pseudo-independence that Michael Collins and Dan Breen won. Neither Collins nor Breen were known for their love of pushing flowers into the barrels of British guns.

Regardless of whether or not you like Gerry Adams, or agree with his politics, the treatment he received at the hands of Byrne and his Free State cohorts on the Late Late Show in 1994, was disgraceful yet typical of Free State ignorance and cowardly conduct.

Gay Byrne would make the casual observer think of a priest without a clerical collar, a perverted one who steals money from the parish and screams at children. His approach to Irish society was based upon patronising any citizen unfortunate enough to enter his ghastly orbit. Byrne gave the impression that he believed everyone else to be beneath him and the one place on Earth you would never want to be is beneath Gay Byrne. Thankfully that cannot happen now as he’s kicked the bucket (the bucket may have contained kittens that he was going to eat).

Rebel Voice finds it nauseating to have observed so many fickle, older Irish citizens laughing at Byrne’s silly comments and acting as if he was a f**king saint when, instead, he was little more than a jumped up piece of D4 crap that fitted in perfectly well with the West-Brit attitudes that dominated the state broadcaster (and still do). 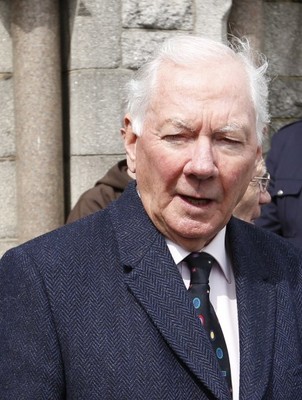 It is only when Ireland is free of the likes of Gay Byrne (there are many others of a similar bent) that we will eventually progress to become a modern and fair nation that can rightly take her place among the other nations of the world. The sooner we are rid of the treacherous attitudes as displayed by Byrne and his like, the better for everyone on the island of Ireland.

Get ready for an Irish puke-fest as has-beens who never were clamber to see who can say the nicest things about a person regarded by many as the spawn of Satan. Rebel Voice believes that there will be one less place in Hell tonight.

Here is a basic questionnaire on the merits of Gay Byrne. Honest answers only please.

Question 1: How evil was Gay Byrne?

Question 2: Was Gay Byrne the love-child of Lucifer?

Question 5: Did Gay Byrne have a holiday home in Hell (now a permanent residence)?

Question 666: Was Gay Byrne’s middle name Damien and he kept it secret from everyone except his Da?

Question 8: Did Gay Byrne (Jeffrey Epstein didn’t kill himself) once take a shit on a child’s head and call it character building?

Question 9: Did Gay Byrne have unprotected sex with Bosco?

Question 10: Did Gay Byrne once strap Pinhead down and whip his bare backside with a broken fishing rod whilst screaming “Eoin O’Duffy is the only true god, motherf**ker”?